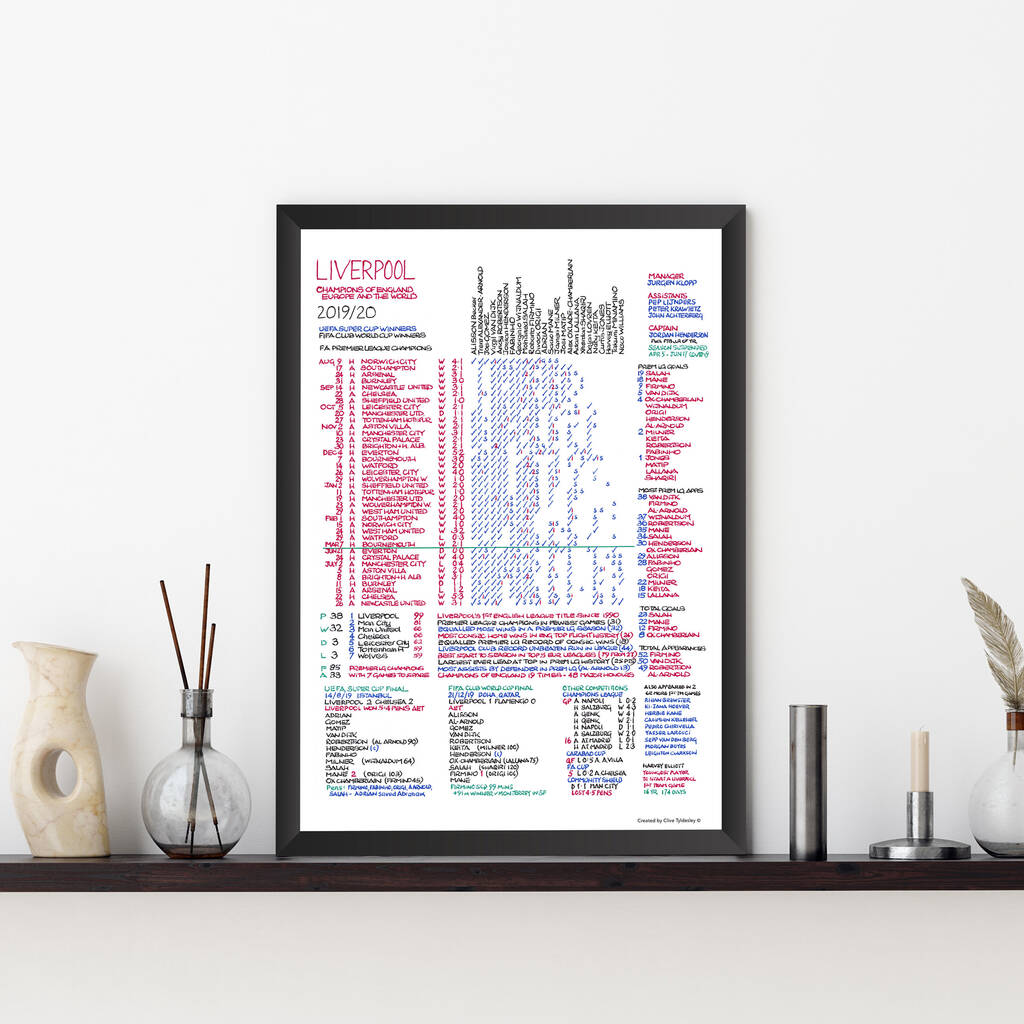 Re-live the joy of a famous game or season with a print of one of Clive's authentic commentary charts. Painstakingly researched and meticulously handwritten by Clive, these prints are beautiful representations of the style of commentary notes Clive looks down on from the high wire of the gantry. This one of 37 teams.

There are three epic Liverpool FC charts to choose from. These charts cover the club’s rise into the elite group of 6-times Champions of Europe, the reclaiming of the English crown after 30 years and their first ever World Club title.

The match charts for the European finals of both 2005 and 2019 detail the line-ups for the famous games in Istanbul and Madrid along with prep notes for all the players and the two managers and research on the background to each match.

Clive compiled his commentary charts in the days leading up to the finals and they contain all of the information he needed at his finger-tips at kick-off against Milan and Spurs. It is all immaculately laid out in colour-coded sections for ease of access during the live television broadcasts and provides two unique mementos of matches watched by many millions around the world.

The chart for the 2020 Premier League champions season is a results and appearances grid showing every game and every goal and chronicling the record-breaking path back to the top of the domestic game via trophy-winning excursions to the European Super Cup and World Club finals. This is the ultimate archive of a story that straddled the Covid lockdown and ended with Jordan Henderson’s joyous trophy lift on the stage erected on the Anfield Kop.

Each of the three charts comes with a separate letter from Clive Tyldesley explaining more.

Choose to have your chart personalised! Clive Tyldesley will sign the back of the chart to a named person of your choice.

Charts are printed on Vision 250gsm board

Our frames are handmade in UK from sustainably sourced real wood , with an open grain finish. A simple flat profile that is 22mm wide and 22mm deep beautifully enhances each commentary chart, showcasing it as the work of art it is. They are fitted with a 1.2mm clear acrylic cover and come with an MDF backing board. The A4 frame comes complete with strut back and two hooks and the A3 frame with two hooks.