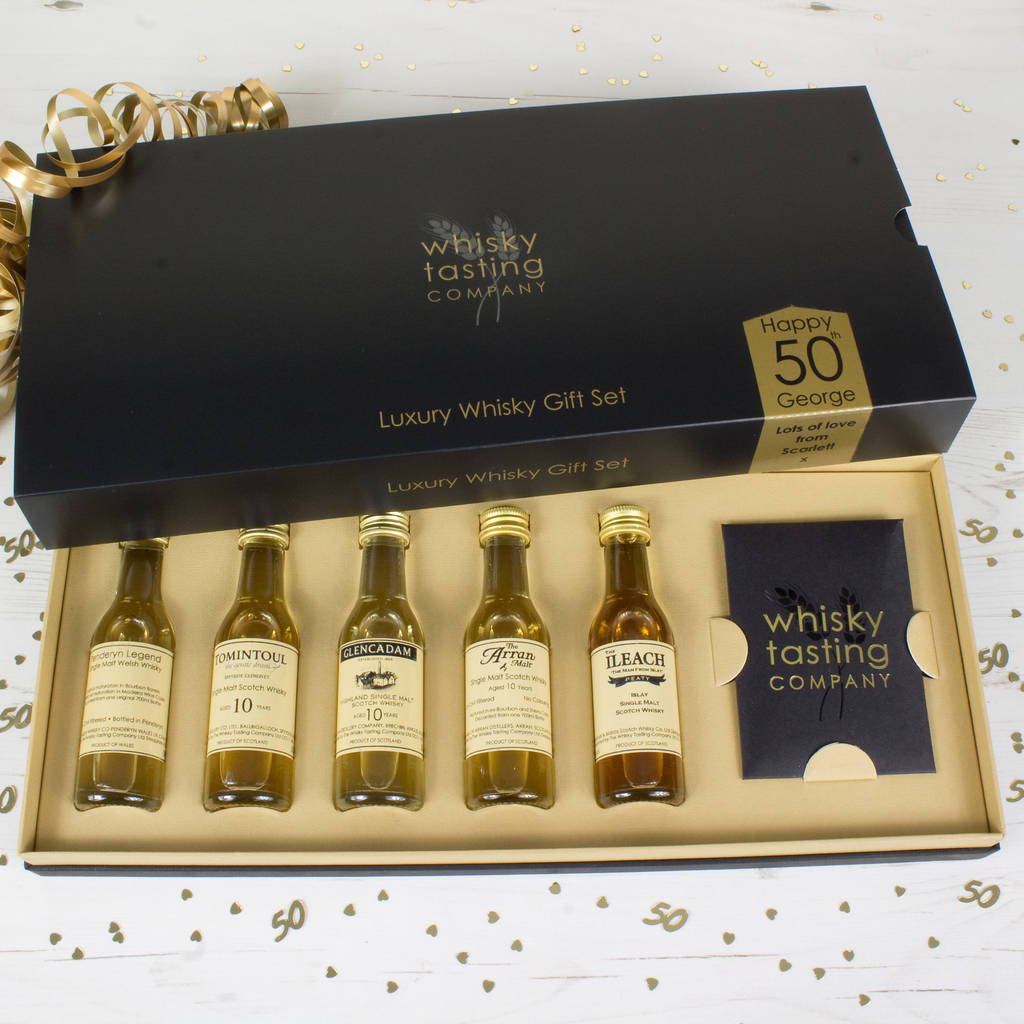 A unique gift for a 40th or 50th birthday, the luxurious set includes single malts from four of Scotland's famous whisky regions plus either a 40 year old or 'Five Decades' Scotch whisky.

The set includes the following whiskies, complete with individual tasting cards and a whisky tasting mat:

Your choice of Cameronbridge aged 40 years OR Tomintoul Five Decades Single Malt (a small supplement on the latter):

The personalised message of your choice appears on the front of the whisky gift set, together with the recipient's name alongside the 40/50th birthday branding on the top and base (see image).

Note on 40 year old whisky: The 40 year from Cameronbridge is the purest form of Scotch whisky, being from just a single oak cask. Cameronbridge is a little-known yet massive distillery and is the distillery behind the ‘Haig Club’ Single Grain Whisky - most of the production is used to make blended whisky so you rarely hear the name, but we have secured some rare stocks of the pure form of the spirit that can be called Cameronbridge single grain whisky. This has been aged in a single oak cask for 40 years since 1978 and is 'cask strength' - straight out of the barrel at 55.6% alcohol..

Note on Tomintoul Five Decades: this is a special edition single malt to commemorates the 50th anniversary of Tomintoul Distillery, which started distilling in 1965. Individual casks from 1965, 1975, 1985, 1995 & 2005 have been selected to represent the flavours from 50 years of craftsmanship at the distillery. Each cask over these 50 years was personally selected by Master Distiller Robert Fleming.

The Whisky Tasting Company are an HMRC-verified Scotch whisky bottler/labeller, guaranteeing the highest standards in bottling and the authenticity of rare stocks of Scotch whisky such as this. We specialise in bottling hard-to-find varieties in miniature at our own facility in Scotland and have received the 'Small Business Sunday' award from Dragon's Den star Theo Paphitis.

Each set contains five bottles of 30ml, refer to images for contents (which may sometimes vary).

Delivery can be 8am and 8pm Monday – Saturday and proof of age may be requested by the courier. Another feature of the age verification is that parcels may not be left in a safe place or left with a neighbour, so someone must be in on the expected delivery date. If not, then we will make 2 further delivery attempts before the parcel is returned to us and we may charge for this along with the outbound delivery charge.