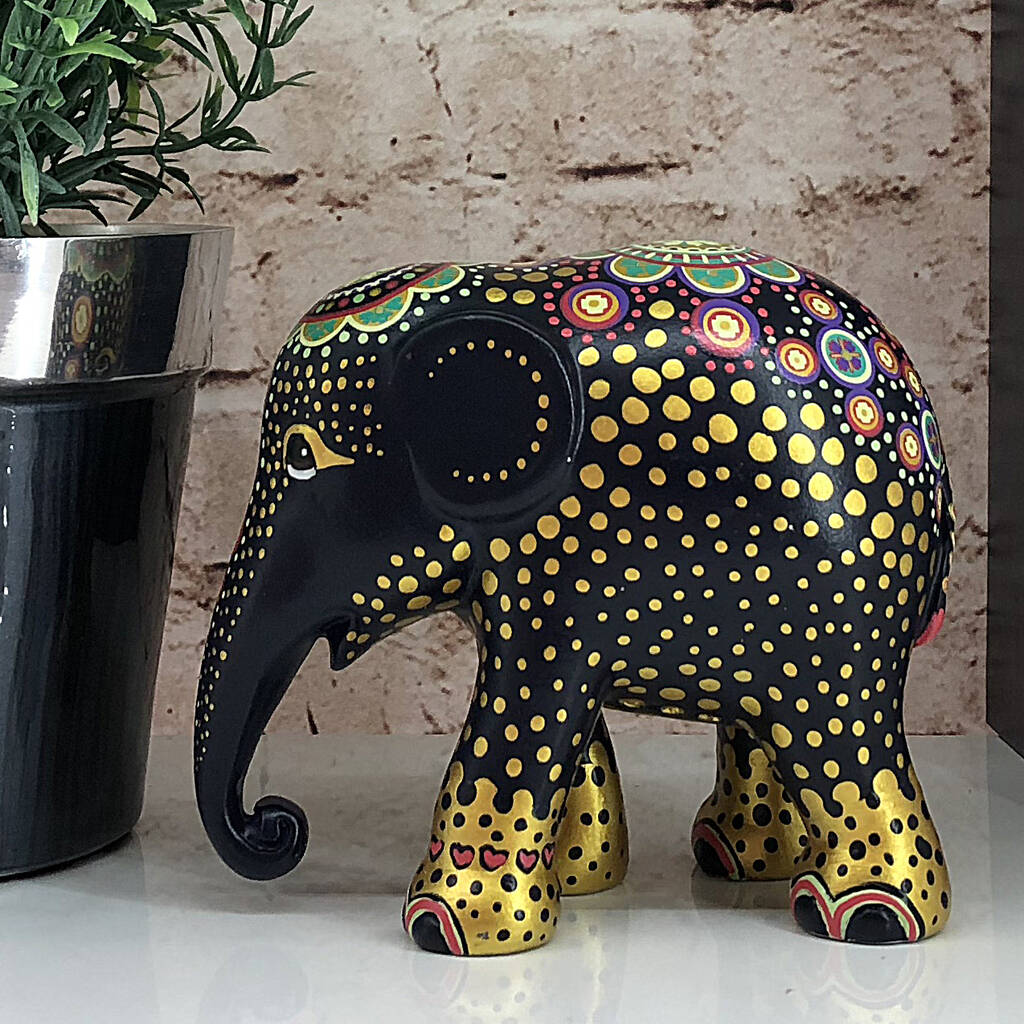 The Bindi Elephant was designed by Catherine Knowles for the Travelling Herd 2016 Parade. The inspiration for Bindi comes from the Asian tradition of adorning and decorating elephants with paint and jewels. Bindi is painted in purple and gold colours because elephants are such regal and proud animals.

A perfect gift to celebrate an engagement, anniversary, Diwali, Eid, Ramadan, Birthday or a special event!

Each elephant comes packaged in a smart black gift box, with a hologram of authenticity and a certificate listing the artist, series, production number, year and parade city. The Elephant is known for its wisdom, strength and as a symbol of good fortune. In the art of Feng Shui it brings energies of beauty, silent power, kindness, fertility & majesty to your home or office. To welcome such positivity into your space place your elephant replica facing inward, preferably just inside the front door. A perfect celebration gift.

Elephant Parade is a social enterprise and runs the world's largest art exhibition of decorated elephant statues to raise awareness and funds for elephant conservation as, without our help, experts predict the endangered Asian

Elephant could become extinct within the next 30 years. Be part of it, and help save the elephants with Elephant Parade.

Made from hand painted poly resin each painted Elephant with vary slightly due to them being painted by hand. Each one is part of a numbered limited edition and comes with a certificate of authenticity and an Elephant parade hollogram.

Please note that due to the hand-painted nature of the Original elephants there will always be minor variability between two identical products. The elephant Original pictures shown online are mainly of the 20 cm models, some variations in detail are possible based on the complexity of the design and the size chosen. Images are not to scale and lifestyle images tend to feature full size elephant originals and the design may differ on a smaller originals.Mosha is the inspiration for Elephant Parade and they have pledged to support her for the rest of her long & happy days. Mosha means star in the Karen language and is the name of the worlds first elephant to have received a prosthetic leg after having lost a limb to a landmine on the Thai-Myanmar border. When Mosha was only seven months old, she was walking in the jungle with her mother, a logging elephant, when she stepped onto a landmine and lost part of her right front leg. Mosha was fortunate to have had a mahout who cared and had resources enough to contact Friends of the Asian Elephant, home to the worlds first elephant hospital, where she was rushed to. Her life was saved and her wound treated, but Mosha began to shun both food and company.

Mosha was not the first and wont be the last elephant, or man, to be injured by landmines. A worrying 16 of Thailands 77 provinces are still affected by landmines, and Friends of The Asian Elephant (FAE) Hospital has treated over a dozen such injuries over the years. Again, chance and fortune led to a meeting with Dr. Therdchai Jivacate an orthopaedic surgeon who made Mosha her first prosthetic leg from plastic, sawdust and metal, which has the ability to support her weight (adult elephants weigh around 5 tonnes) as well as offer her mobility, much needed in an active and naughty young elephant!

As Mosha has grown, she has had to be fitted with a new prosthesis and now at 14 years old, she is a healthy and vibrant young elephant with a long life ahead of her. She will need a new prosthesis every year until she stops growing at 20 years old.