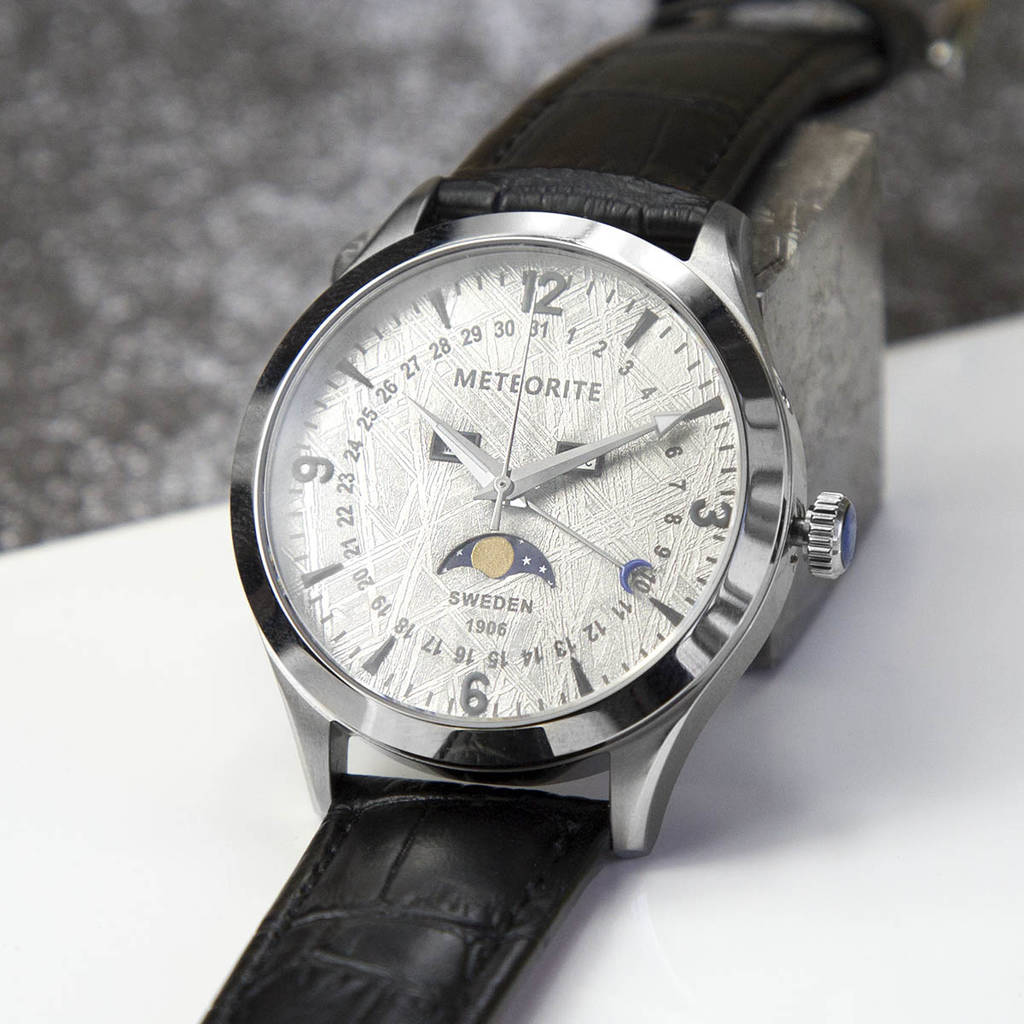 Sorry, this item is no longer available

This extraordinary Delux Muonionalusta Meteorite Watch is an extra-terrestrial slice of natural history, and will become a treasured family heirloom, for generations to come.

This extraordinary Delux Muonionalusta Meteorite Watch is an extra-terrestrial slice of natural history, and will become a treasured family heirloom, for generations to come.

The face of this talking point watch is a slither of pure Muonionalusta meteorite. In addition to glow in the dark hour and minute hands this watch features a second hand, date hand, lunar phase dial and a day and month display. What more could you ask for? A fashionable finish to any look this stunning statement timepiece is the perfect gift for the man who has everything.

Over 100,000 years ago, a handful of these mysterious Muonionalusta meteorites impacted earth. Searches for the impact crater from the original shower have been in vain; the site where these specimens are found is in a remote area of northern Sweden, is it presumed they were carried there by glaciers.

The Muonionalusta meteorites are not only extremely rare, they are almost always buried! To make finding the specimens just a little harder Swedish law dictates that a license must be obtained, and then those pieces buried in the perma-frost must be excavated by hand. We will provide a certificate of origin and authenticity with piece of meteorite jewellery.

Iron Nickel meteorites, like the Muonionalusta generally start as the very core of a planet, the amazing Widmanstätten patterns (unearthly metallic grids in shimmering shades of grey and silver seen when the meteorite is sliced) are formed only in space. The molten centre of a planet’s core is cooled to form this metal at 1 degree per million years, then when the iron is removed the striking nickel crystal formations can be seen.

During ancient times meteorite was considered far more valuable than gold. Tutankhamen was found with meteorite daggers in his tomb and the ancient myth of Thor’s hammer, has been attributed to prized rare meteorite.