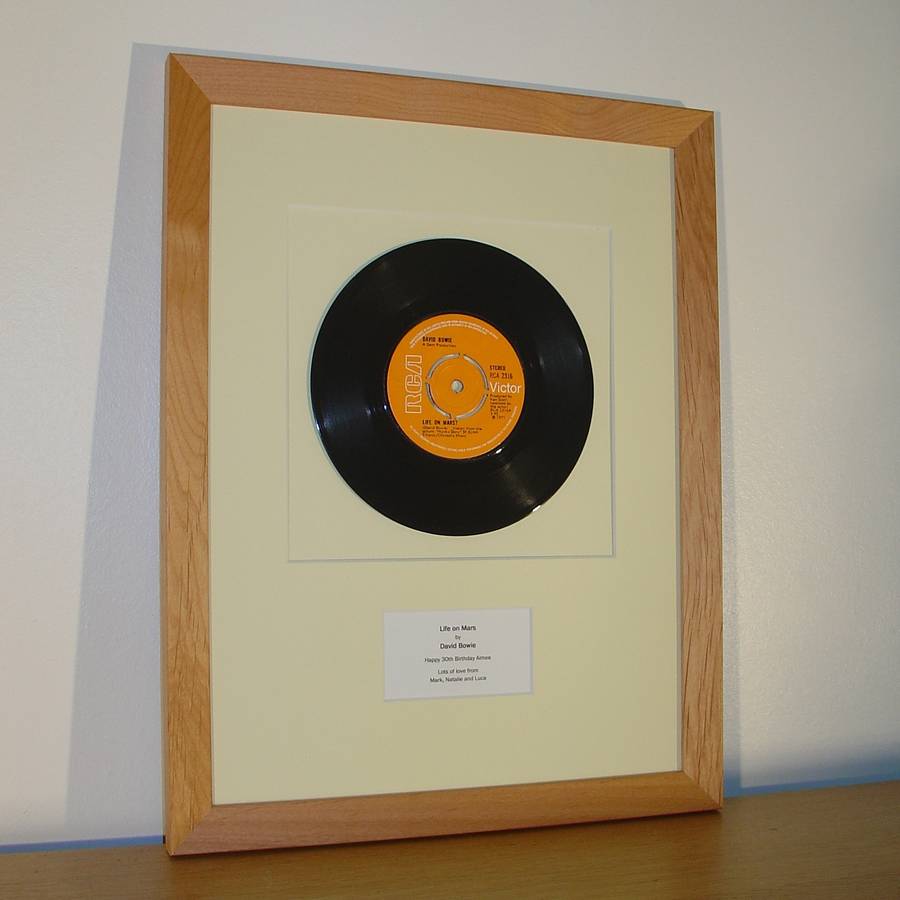 Sorry, this item is currently out of stock

A personalised framed original record is the perfect 'record' of a special day.

A personalised framed original record is the perfect 'record' of a special day.

A personalised framed original vinyl single is the perfect "record" of a special day or song.

The first piece of music that the newly-wed couple dance to is an unforgettable moment at any wedding.

We'll find an original copy of the record and frame it with your own personalised message mounted behind glass inside the frame.

Please note that this will not be a replica of any kind: we source the actual record produced at the time of its release.

The size and format of the disc itself will depend on the year when it was released. Vinyl singles were the dominant format up to the 1990s when CD singles took over. Since downloads and streaming became the most popular way of listening to music, many songs are still released on vinyl or CD (or both), but some won't be available at all in a physical format.

Some popular songs were never released as singles at all, but were featured on albums (bigger, long playing discs featuring 10-15 songs in total). The songs are usually listed on the label of the album and this is a popular alternative if a song has not been released as a single.

We'll always check for you however and let you know within 24 hours.

The record you have chosen will be beautifully mounted behind glass inside your choice of a natural or black wood or aluminium silver frame which is supplied ready for hanging.

The vinyl record or CD will be firmly secured to the mount board and is not designed to be removed easily for playing.

Other frame styles and mount colours are available so if you would like something different please ask us and we'll do our best to help.

Framed 7" and CD singles cost £95.00 each including delivery.

12-inch singles come in a larger frame and cost £109.00 including delivery.

We use high quality frames supplied by Nielsen and fitted with glass (not acrylic) for an excellent finish.

Our speed of delivery depends upon how quickly we can locate the record you would like framed. If we can source the record locally then we can often deliver within 3-4 days. If we use one of our suppliers elsewhere in the UK then we need to allow for the time the record takes to reach us by post and this takes a little longer. We deliver nearly every order within 14 days of receiving payment.

Here is how we have done in the past 6 months:

We always use a next working day delivery service (Parcelforce Express 24) once a framed record is complete.

If this is inconvenient then please let us know and we will do our utmost to find a way to meet your requirements.