The brand is best known for its London alphabet. These artworks are made up intricate illustrations of landmarks, arranged to create the first letter of different areas of London. The range began with the Brixton “B” and was so popular that a whole alphabet followed. The areas were chosen based on demand, sometimes with multiple requests for each letter, and much of the content was crowd-sourced from the LucyLovesThis blog.

Lucy’s products are stocked in high street stores including Selfridges, fenwicks and Liberty, London boutiques, major online outlets and have been sold all over the world.

Lucy has worked on commissions for many large UK companies including Waitrose, Joseph Joseph and Random House. Her products have been featured on several TV shows including Made in Chelsea, Liberty of London and The Great Interior Design Challenge.

All products are made in Britain. 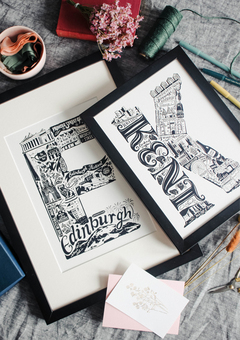 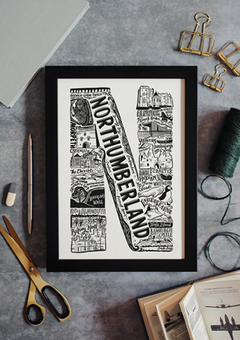 We try to keep our postage costs as low as possible for you, so we send everything by unrecorded first class mail.

Please note we are unable to ship framed prints overseas. International framed orders will be refunded the cost of the frame and dispatched unframed.

We ship from the UK, so for international orders the estimated arrival is 12-15 days from the moment of shipping. Sometimes it may take a little longer; please be aware that possible delays are beyond our control.

All prints will be dispatched in secure, robust cardboard tubes, or hard-backed cardboard packaging.

All images and designs are the property and copyright of LucyLovesThis Limited.