A love story about a couple with a furry tail ending...

Tache is the story of Frank and Pennie....and a kitten called Tache, named after her moustachioed face markings!

Pennie in Fashion and Frank in web design.

‘Frank often watched me hand-making greetings cards for family and friends’ says Pennie. ‘You thought I was mesmerised by your creativity, but really I was stealing your ideas,’ chuckles Frank.

So, for her birthday, Pennie was surprised to receive a handmade card from Frank - a 3D cut-out of two cartoon cats - a smug Tom handing a heart-shaped balloon to his unimpressed sweetheart.

Despite taking his inspiration from Pennie, Frank had employed some genuinely innovative techniques, giving the card a charming originality. A sticky heart-shaped seal, a lined envelope and as a final loving touch, Frank hid a matching mini envelope inside, containing tickets to a London show! ‘It took me ages!’ says Frank.

And so the business idea began... 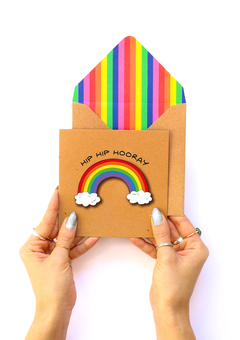 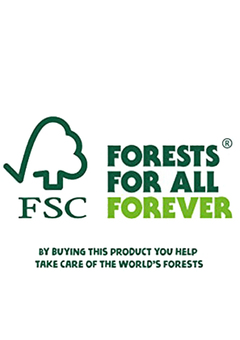 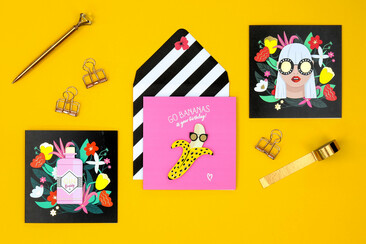 TACHE is a multi award-winning* publisher of unique, fun and colourful greetings cards that are designed and handmade in Britain, using only the highest quality FSC Certified materials (FSC C004309).

We believe passionately in the power of a smile and the protection of our planet, which is why it's our mission to produce, fun, fresh, happy and sustainable products that are designed to make you smile. We are in the business of creating smiles and spreading happiness - it's what we do best!

TACHE is proudly accredited as a Living Wage Foundation employer.

All of our products are shipped to you in a "Please do not bend" envelope.

All cards sent direct to recipient are sealed and sent in their beautiful envelopes with a written message inside.

Opening and closing times for enquiries are:

We process and dispatch our orders every:

** Please do not hesitate to contact us if you require special delivery requirements, we will always try to help you :)

We aim to ship all orders within 1-2 days of purchase, but please allow more days during very busy periods and lockdown :)

We ship all our orders with Royal Mail, 1st or 2nd class. YOU CHOOSE :)

We will always try and despatch your items same day or next working day from receipt of your order. If any items are out of stock we will let you know straight away, we can usually get these items to you within 5 working days.