Mabel Hasell is a London based jewellery designer, originally from Devon. She uses the lost wax casting technique to set gemstones into jewellery with unpredictable and intriguing results. Mabel creates a piece in wax, placing stones where she’d like them to set. Molten metal replaces the wax, flowing in and surrounding each gem, sometimes causing the gems to move and cluster in different positions.

Mabel embraces the idea of chance and although she has mastered the lost wax casting technique there is still an element of uncertainty of where the gems may move. The most exciting part of her making process is polishing the final ring to reveal stones that have moved in the molten metal. The end products are striking organic designs that physically embrace the vibrant gemstones. Many of her pieces are one of a kind and her rings are often bought as engagement rings for those looking for something a little different.

She has proved herself as a promising designer and demonstrated that playing with chance really is a beautiful thing. 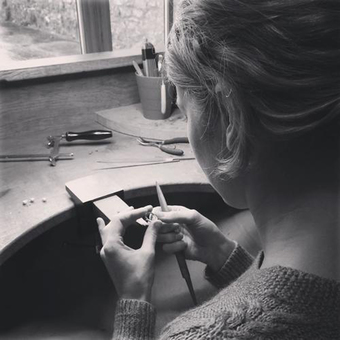 Please note if you choose free delivery your parcel will not be insured or tracked.

Made to order pieces can not be returned.