This partner has a rating of 4 stars Artwork that changes by night

I'm Zoe Mond. A few years ago my son asked me to paint a giant squid in his room. I thought, why not? And it was quite giant, about 8 ft tall. Once finished I thought, how could I make it even better? So I got some glow in the dark paint to colour in the Squid's suckers. Now it really was cool enough for a 9 year old.

The paint dried an off white, looking at my sons white ceiling I started to think I could really have some fun. I found some more glow in the dark paints which were blue, aqua even red and purple. I created a Milky way, thousands of stars, galaxies, a moon, shooting stars and even a few constellations. Which all disappear as soon as you switch on the bedroom light.

I painted my neighbours' children's ceilings, then I started painting ceilings all over the South East. The most common reaction is, "It's like you've taken the roof off!". However not everyone can have a ceiling painted so I experimented, and eventually I created these canvases for everyone to enjoy looking for their own secret glowing galaxies. 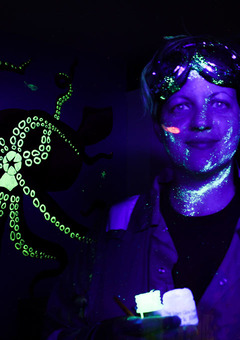 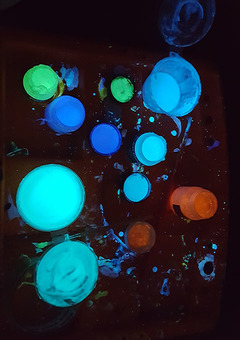 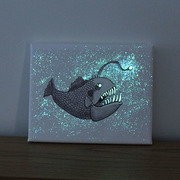