Starting in 2014 from a need to escape from the hot and sweltering kitchen assistant job, Jess became obsessed with creating pom poms. It wasn't until people started asking to buy her creations did she think it could become the job of her dreams.

By 2017 Jess was able to quit her job to pursue the world of pom pom making full time. To find out 2 weeks later she was pregnant! To put it lightly it was a shock, but the driving force was strong and Fat Pom Poms grew and grew giving Jess the flexibility and creative outlet she needed.

Fast forward to having a small child and this is when 'The Pom Pom Person' was born. The first in a series of 'Wonder Women' was an instant hit. Since then many other bespoke projects have been commissioned and this journey has just begun! 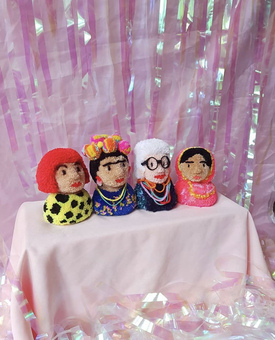 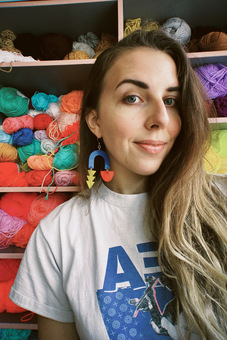 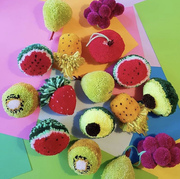 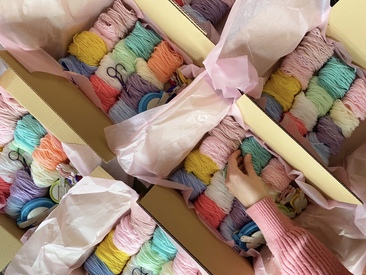 You don't just get to own a Fat Pom Poms piece of work, you also get to learn how to create your own!

I had a dream of creating an affordable way people could own one of my Fruit Garlands so the Fruit DIY Kit was launched when I came back after maternity leave. Since then I've produced 'The Starter Kit', 'The Garland kit' & 'The Solar System Kit'! My ultimate goal is to have a unique collection of craft kits for anyone who would like to learn a new skill and needs an activity to relax into. Because thats what pom pom making does! It's good for the soul.

I like to use 100% vegan wool in all of my work and encourage the keeping of scraps and cuttings. There are so many great projects to undertake with scraps of wool and I look forward to creating the craft kit of dreams using them in the near future!

All Craft Kits will be sent within 4 days of receiving the order.

Bespoke work can take up to 6-8 weeks to dispatch around busy periods of the year.

Please do not hesitate to message with a particular date you will need your purchase by and we will try and accommodate.

All items are sent by 2nd class postage unless upgraded.

2nd class postage can take 2-3 days to arrive, however this is just an estimate.

If you would like to track your item please select the shipping upgrades otherwise I won't be able to provide a tracking number.

If you receive a damaged parcel or defective goods please contact us immediately.