Passionate about passing on a love of folding paper.

Origami Est originates from Esther’s passion for folding paper. Est is an avid origami fan and specialises in multi-modular origami creations. She enjoys celebrating the traditional Japanese art of paper folding while adding a contemporary edge. Est's award winning book is an excellent way to begin exploring the world of paper folding for yourself. With a background in both graphic design and teaching primary aged children, Est also enjoys providing origami workshops.

Esther & her family, are currently based in Central England. They have 2 fabulous house guinea pigs called Boyd & ALexander.

At least 10% of Origami-Est proceeds are donated to Stop the Traffik, a charity committed to helping people find freedom from being trafficked as well as promoting awareness of the shocking realities of human trafficking. 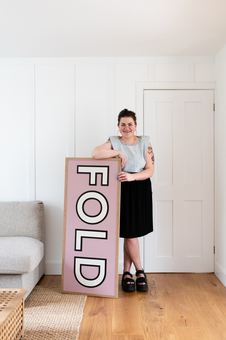 There’s just a handful of stock that’s up for grabs at one time, for this reason a lot of Esther’s items are made to order, especially for you. Bearing this in mind please allow up to seven days for your order to be folded and boxed up ready to be on its way to you. Est will process your order as quick as possible but please do consider this when ordering. Esther will contact you by email if there’s any unexpected delay due to busy seasons. POSTAGE & PACKAGING EST loves to make all things papery beautiful & this includes her packaging. Your order will be packaged with the utmost care & adorned with prettiness! All postage is calculated with Royal Mail's 1st class service. All orders are shipped within seven days of ordering, as most items are made to order. INTERNATIONAL ORDERS Any customs or import duties are charged when your parcel reaches its destination country. These charges must be paid by the recipient of the parcel. Unfortunately we have no control over these charges. Origami-Est holds no responsibility for the charges that maybe imposed.